A History of Calisthenics at The State Library of Victoria 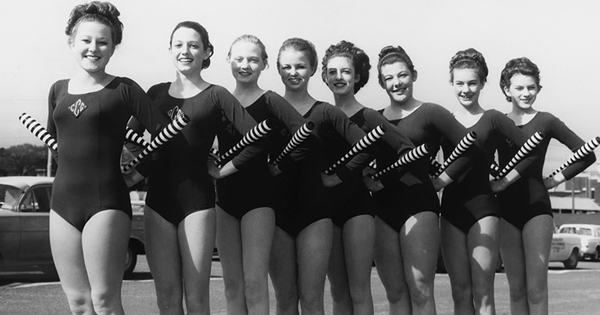 From November 2016, the State Library of Victoria will include a display about the development of Calisthenics in their exhibition The Changing Face of Victoria. The focus is on “Calisthenics Great Lady” Vera Hopton and her Clifton Calisthenics College. Known for flair and precision, Miss Hopton’s Clifton Calisthenics College dominated competition by the late 1930s. Vera is credited with introducing more balletic, less martial forms to calisthenics. She held her girls to high standards both on stage and off: Jan Murray, a former student, describes Clifton as her “finishing school.” The College was closed in 1977 after Miss Hopton suffered a stroke, however, Vera’s legacy continues. A number of the most successful contemporary clubs can trace their lineage back to Clifton. The library holds Vera Hopton’s archive and the display materials were drawn from this with additional materials loaned from former students of Miss Hopton including photographs, costumes, adjudication sheets, competition programs and a pair of Indian clubs.

The display is on view everyday at the State Library of Victoria 10am-5pm in the Dome Galleries Level 5 until late November 2017.

Stay tuned as the State Library plans to host talks and other events in association with the display throughout the year. For more information visit https://www.slv.vic.gov.au/whats-on/changing-face-victoria